Scientists at SDZWA discovered two California condor chicks have hatched from unfertilized eggs. This sort of asexual reproduction, known as parthenogenesis, is a first for the species and provides new hope for their recovery. Read more: https://t.co/m5MZhqt21l pic.twitter.com/vRxGbKZy2S

Parthenogenesis across the tree of life

The thing is, parthenogenesis is relatively rare among animals and occurs lot more frequently in certain parts of the animal tree of life. There are plenty of cases of parthenogenetic arthropods or fishes, but only very few cases among groups as sharks or birds and there is no case at all in mammals. Therefore every time there is a virgin birth in sharks or this time in birds, it creates a fuzz. 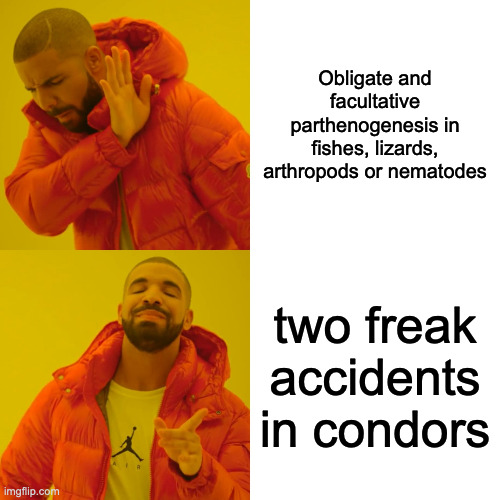 Why parthenogenesis is so rare in some groups but not others? Well it all depends on how distant is the regular sexual reproduction of the species/clade from parthenogenetic. Two main factors are:

The harder is to meet these conditions, less likely it is for a species to be able to reproduce parthenogenetically.

The first condition is usually due some for of altered meiosis. That alteration can be co-incidental (as it probably is in those very rare cases of parthenogenesis in sharks) or permanent - as it occurs in several obligately parthenogenetic species (like some Timema stick insects). The alteration of meiosis can various outcomes, the parthenogenesis can take a form of clonality (so called mitotic parthenogenesis, daughters will be exact copies of their mums), or only one of the two maternal haplotypes gets duplicated in the egg (gamete duplication), or something in between (different forms of automixis).

Type of parthenogenesis in condors

Let’s start with very basis - two different female condors (of course a female) generated two different chicks - both of them males. This alone excludes the possibility of clonality. How comes? Birds have what’s called, ZW sex determination system. It’s in principle similar to XY we know from humans, but the difference is that females have 2 different chromosomes, Z and W, while males have two copies of Z (so ZZ). So, if the offspring would be a clone of the mum, they would have both Z and W chromosomes and therefore they would develop in females. That did not happen, both chicks must have had two Z chromosomes.

That narrows our search for the type of facultative parthenogenesis in condors. The only two types that will generate an unreduced gamete are either automixis terminal fusion or gamete duplication. The difference is in the heterozygosity loss, while terminal fusion has a capacity to preserve heterozygosity around telomeric regions, gamete duplication will cause a complete loss of heterozygosity. The male, although really diploid, will be effectively haploid, because the two genomic copies will be practically identical.

Which one is it then? If we take a look at the results, authors of the original study by Ryder et al., used 11 informative genetic markers. They determined genotype of mums, their mates and their sons. Sons shared no genotypes with their dads (that’w how they found they are parthenogenetic), but moreover, they were homozygous for all 11 loci they inherited from their mum. You can check it in this table. Therefore my best guess is gamete duplication.

This is actually really really cool. There is a scientific word for parthenogenesis where mums generate sons parthenogenetically - arrhenotoky. This form of reproduction is known in ants, bees, thirps or some mites and it is called “Haplodiploidy”. That’s because females are diploid and sexual, while males are haploid and parthenogenetic (all eggs that are not fertilised will develop in males). This is a very interesting system, but till known only in arthropods and rotifers (check this review for more info).

Therefore, California condors are the first vertebrate species with occasional arrhenotoky. Which is actually really interesting peculiarity. However, what are the real implications for conservation?

Photo by Chris Trent from usfws.medium.com.

Can condors have parthenogenetic daughters?

That will be most likely nope. Why? If the offspring is always made of a single haplotype only, it can not ever carry both Z and W chromosomes. It will either have WW and that won’t be a viable embryo simply because no bird can live without all the genes on the Z chromosome (just like YY in humans) or it will be ZZ and it will develop in completely homozygous male.

However, even if the parthenogenesis in condors IS a lot more frequent than we think, the only consequence would be a bias the sex ratio in the population, which is actually not so great given Californian condors mate for life.

So, I would say the observation is really really cool, but I am quite sceptical about implication for the future of condor conservation.

Have you heard about PeerCommunityIn, or PCI for short? It’s an organisation, that runs a peer reviewing platform and a diamond-open access journal. The way it works is, you submit a preprit to any of the preprint servers (such as bioRxiv) and then pass the details to appropriate PCI (there are 15 are moment for all sorts of disciplines). There will be a recommender (moreless like an editor), who will manage your preprint, evaluate if it is a credible piece and then send invitations to reviewers. Once you get through the review process, your priperint will get recommended. Once that happens, it’s up to you what you do next, you can either submit the already reviewed preprint to one of the classical journals, or you can right away publish it in the PCI Journal. The initiative is great for reducing work load for reviewers, bringing transparency to the review process and finally brings a sustainable solution to scientific publishing - you should totally check it out.