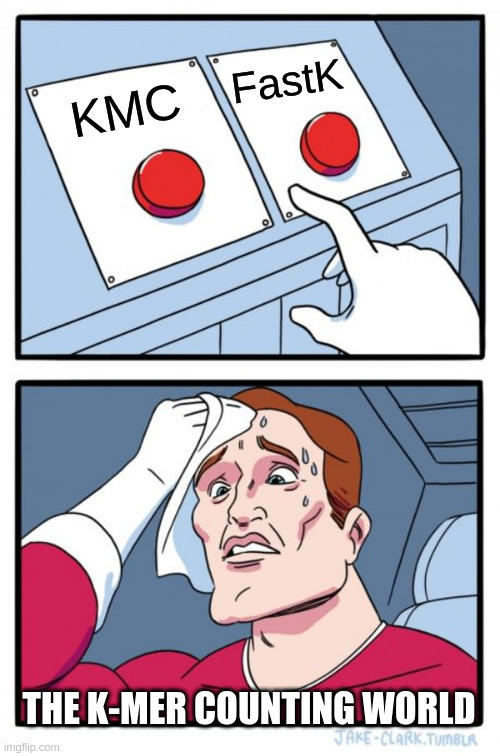 Gene Myers last year shared on GitHub his fork of GenomeScope v2.0 that works on turnicated kmer spectra GENESCOPE.FK calculated by his new ultrafast kmer counter FastK. I immediately started writing this blogpost and then I fogot about it. So, with a year delay, here is testing of the software on a difficult genome, compared to the tools I routinely use.

The difficult benchmarking genome I picked is the triploid Marbled Crayfish genome (Gutekunst et al. 2018). The genome contains several super-repetitive genomic kmers that were messing up all the initial kmer analyses of the genome (check this older blogpost).

The aim of this blog is to:

To see how exactly I did analyses for this blog, see Methods sections bellow.

The practical difference between KMC and FastK

KMC is a k-mer counter that is “giving-up” on k-mer coverage over a threshold specified by parameter (-cs). Every k-mer with coverage higher than that will be simply reported as with cx coverage. This is what is causing problems with the real k-mer coverage is a lot higher for plenty of real genomic k-mers (as discussed in that already linked older blogpost).

FastK on the other hand uses a different strategy - it calculates coverages in fixed coverage range 1 to ~2^15x (32768). And for all k-mers with coverage above, it calculates the total count. Furthermore, Histex (FastK tool to make histograms) produces histograms of freqiencies of coverages for all but the last calculated coverage values (by default 100x). The last frequency does not represent the number of distinct k-mers with this coverage or higher (as in KMC), but the theoretical number of distinct k-mers with that coverage and would generate the same coverage as the repetitive k-mers.

To demonstrate what I mean, check the following R snippet

So the difference is that while KMC is able to inform us about exact frequencies of k-mers and their repetitiveness, fastK is limited to 32768x. However, we needed to calculate all k-mer explicitly with KMC to get the right genome size estimate, FastK trick actually does not hinder the estimate as the genome size is practically (cov * freq) / (1n_kmer_coverage * ploidy).

Alright, now we understand the difference between approaches. We fit two models - KMC histogram with regular GenomeScope 2.0 and FastK using the adjusted GENESCOPE.FK. 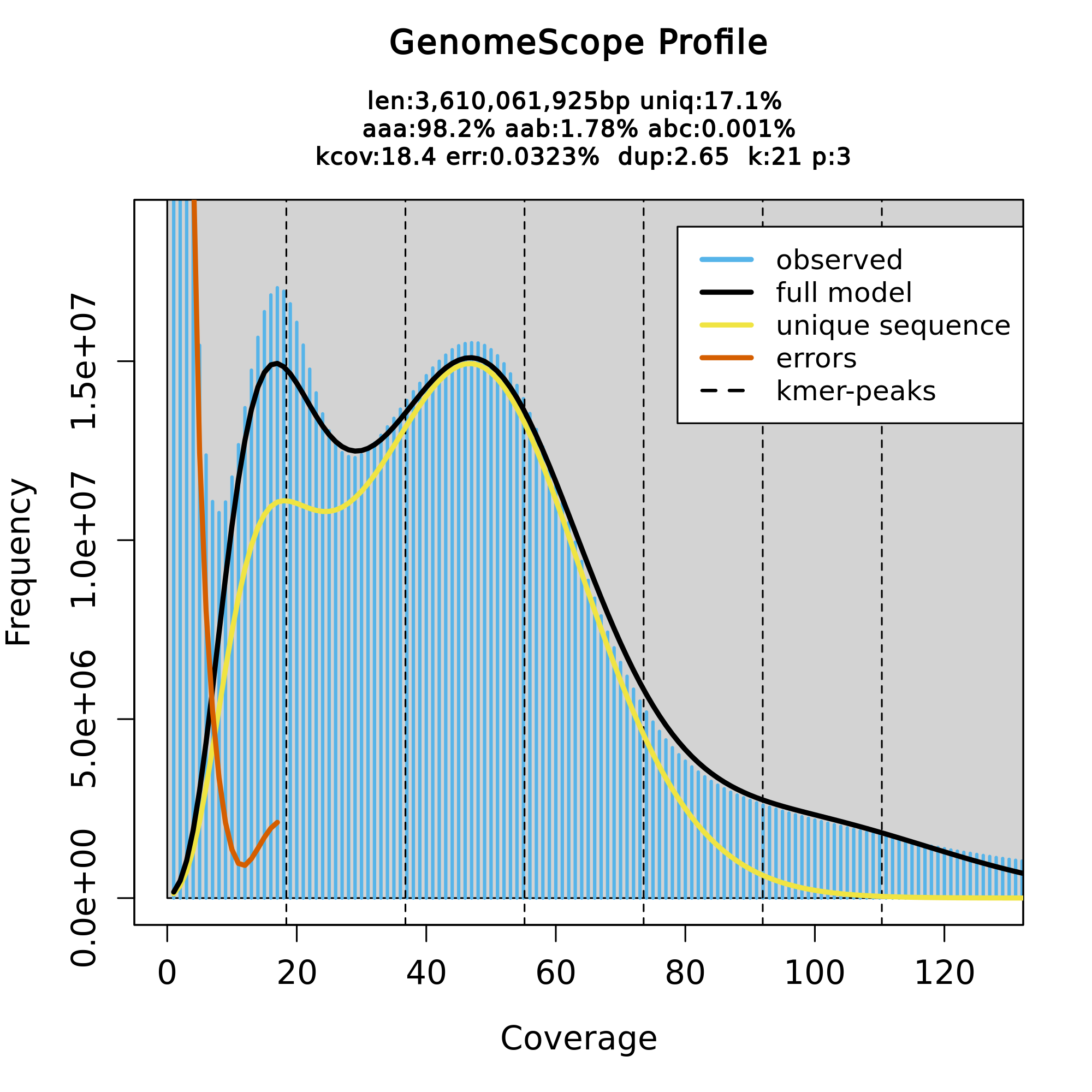 and this is how the default fastK model looks like 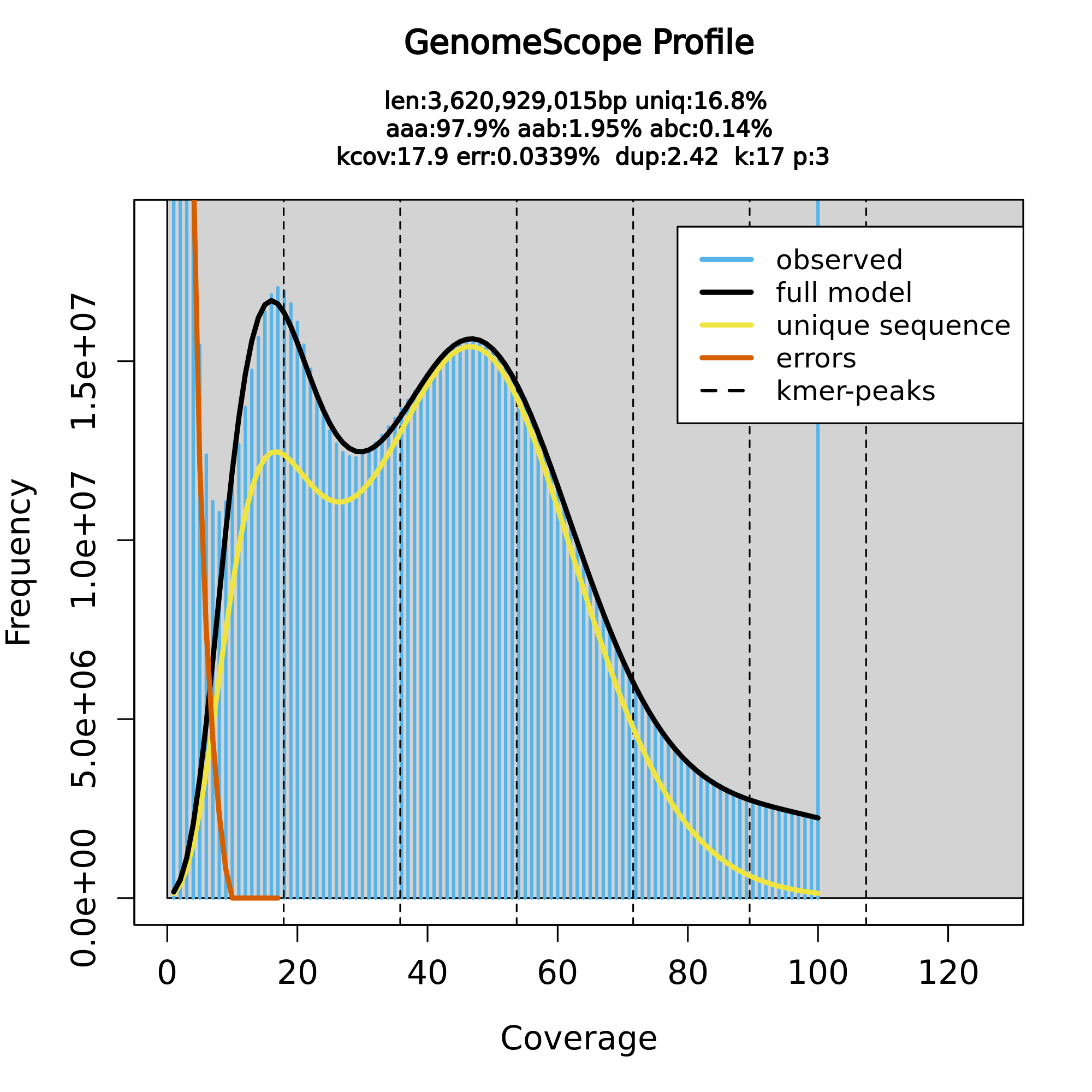 It almost seems that the last of higher frequency k-mers made a better fit of the lower frequency k-mers. The fastK black line look nearly the same as the GenomeScope line. I suspect, if I made the k-mer histogram to more than 100x, the estimates would be nearly (if not completelly) the same.

So main conclusion here is that FastK and GenomeScope.FK are able to estimate properties even difficult genomes (just like KMC/GenomeScope did).

The main selling point of fastK is the speed up. By not counting all the repetitive k-mers, it saves a lot of time.

I also wanted to test less (4) cores, just to check the quality of paralelization, but I ended up testing a different feature by accident. I calculated the two histograms using 4 cores on raw reads (instead of trimmed ones). On the raw reads, it took 234m39s to get the hitogram to KMC, and 146m54s to FastK. With 4 cores, the speed-up, is much less impressive - just about 1.6x. How comes?

I suspect the major difference comes from the ratio of super-repetitive kmers to the total number of k-mers that occur in the read set. The trimmed dataset must have had a lot fewer low, frequency k-mers and therefore the relative gain of FastK to KMC was a lot more significant. I suspect also that genomes with less repetitive nature would also make the two k-mer counters more even.

K-mer spectra analyses are usually quite robust to messiness in data. In vast majority of cases I don’t bother trimming the data before caluclating the k-mer spectra. However, there are some cases, where the singal to noise ratio is so much on the edge, the trimming can help get the model nice.

This is exactly the case of the marbeled crayfish: 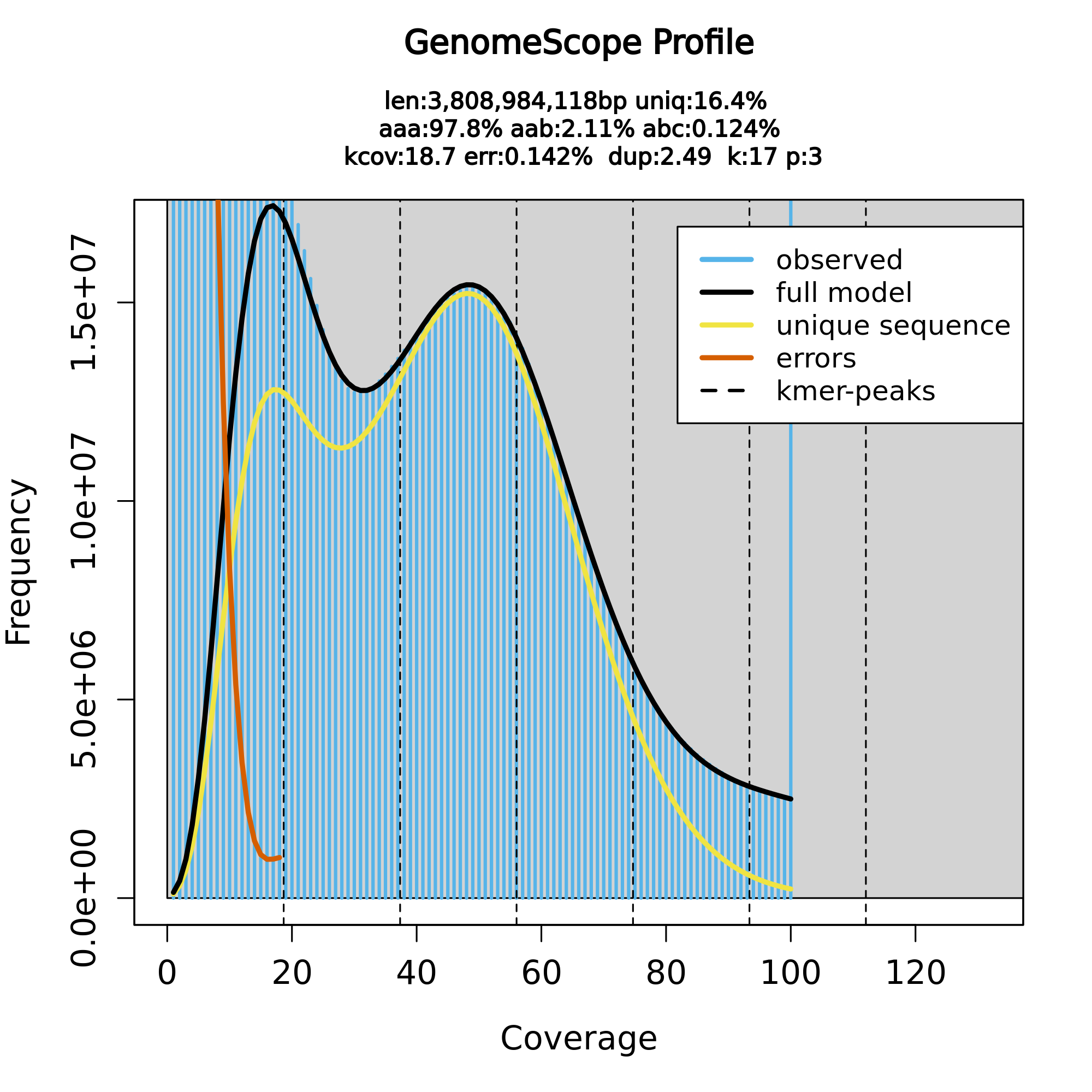 You see the model is a lot more messy. The error peak and the heterozygosity peaks are blended and both genome size and heterozygosity estimates are quite off comapred to the fits above.

This is just for an inspiration. If you have one of these “edge” datasets, you might want to try decrease your k and trim the reads before fitting a genome model.

Rayan Chikhi asked why I did not use ntCard. And it is a fair question. Although ntCard is much less popular than Jellyfish or KMC, this tool managed to get the histogram from the same dataset in impressive 13m7s (16 cores and 512GB memory at disposition), which is 2.5x faster than FastK.

This limit creates a big problem for correct genome size estimate. The model based on ntCard histogram estimated the genome size to 2.6Gbp only, which is nearly 1Gbp less than expected.

This probably won’t be a problem for any smallish genomes. So folks that know the coverage limitation is not a problem for them might want consider ntCard as the weapon of choice. Furthermore, the reaction of the developers on twitter gave me hopes we might see the high coverage k-mer counting feature implemented some time.

ntCard likely uses 16 bit integers as counters, hence the limit. Sounds like a simple change I can try, at the cost of memory usage.

ntCard is by far the fastest method to create a k-mer spectrum, but unfortunately it does not do well with extremely repetitive k-mers.

Among those that allow us to estimate the genome size correctly, FastK is quite a bit faster than KMC and the speed-up is more significant for read sets with higher fraction of repetitive k-mers. If you run k-mer analyses on daily basis, you might want to consider switching to FastK.

However, that applies only to people that are not interested in the repetitive k-mers. I would be personally really interested to understand what are all these superrepetitive k-mers about and knowing their sequence and exact coverage distribution is a fine way to start.

Also a fair disclaimer, I did run in some issues while I was setting up FastK on our cluster (reported here). It was not that difficult to overcome them, but if my goal would be to analyse single middle-sized genome, it would be still faster with KMC, as it is really easy to set up that one up with simple conda install -c bioconda kmc.

with all the data, let’s jump to kmer counting.

Halfway thought the benchmarking I recalled that the crayfish data were borderline noisy and it was actually really helpful to trim them. It also afect the kmer counters as it will decrease quite a lot the number of distinct kmers in the dataset.

The trimming was done using skewer for each two files as

Instaling FastK on a cluster was not trivial, but eventually with some help I managed to get it work solely with programs installed via conda (the steps and probems are here). Anyway, I got FastK compiled and running.

I will test ntcard with 16 cores / trimmed reads only (because I erased the raw ones already) and it seems I can’t specify the limit of used memory.

How exciting is parthenogenesis in condors?

How common is polyploidy among eukaryotes?

This easter I have spent on thinking / writing / editing of an introduction to the paper about smudgeplot - a tool for predicting ploidy and visualization of genome structure. I collaborated on this tool for my own data, I have not really thought through how far it goes, so I started to wonder how many polyploid species are out there. So I asked on Twitter and guess what, so many people have responded to the tweet that I have decided to compile the answers in a blogpost.